Handa-kun is a spin-off manga series written and illustrated by Satsuki Yoshino. The spin-off has had 7 volumes published in tankoubon format (as of September 12, 2016).

Seishuu Handa is everything a high school boy could hope to be: handsome, smart, and a calligraphy genius. Though he is revered by the whole school, Handa is completely unaware of his popularity. Much to his best friend Takao Kawafuji's amusement, Handa is convinced that the admiration of his classmates is actually bullying. Unfortunately for him, every action he takes in order to avoid being "bullied" results in another student, be they model or delinquent, joining the ranks of the Handa worshippers. 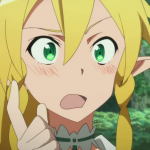