Rina Endou
Hina Kubota (久保田 陽菜 Kubota Hina) is a child from the island and the best friend of Naru Kotoishi.

Hina's black hair length goes down to her shoulder blades and has a side parting that's swept to the left. The girl has a light pink flower pin, pinning back the hair which is on her right side. She has light brown eyes and chubby cheeks.

She normally has a small frown, making her cheeks look even chubbier though when she's with Naru Kotoishi she smiles from time to time.

Hina is really shy and quick to cry, especially when dealing with strangers. The first time she met Seishuu Handa, she cried every time he did something even though it wasn't something bad. Naru Kotoishi told Seishuu that she also cries when she is happy. She seems to cry less often when around those she is comfortable with, as shown when she hangs out with Naru and Seishuu, whom she grows to like and gets used to. Aside from her crying, she is one of the more behaved children of the island, rarely getting herself in trouble and staying put (an example would be in episode 4 where everyone put paint on their hands and handprinted the boat Seishuu was supposed to paint and she didn't). She also seems to hate gross or slimy things, as shown by her interaction when Naru tries to get her to touch a slug in episode 5 and a cockroach in episode 7 (where she ran away from Naru when she tried to force Hina to touch it).

Hina in the manga 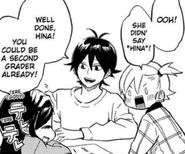 Hina happy about being praised by sensei

Hina crying intentionally because she knows sensei won’t ignore her 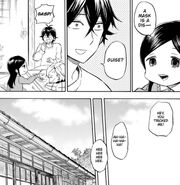 Hina displaying her cunning side as she tricks sensei into saying the word ‘guys’.
Community content is available under CC-BY-SA unless otherwise noted.