Kouki Uchiyama
Hiroshi Kido (木戸 浩志, Kido Hiroshi) is a side character of Barakamon. He is a son of the village elder and a high school student who lives in the Goto Islands. He was always mediocre with everything and only had three on his report card. When he saw how hard Seishuu Handa worked, he inspired himself and decided to do everything in his power. Recently, he has been working hard to get to the culinary school outside the island.

When Hiroshi was in Junior High, he always got three for everything and was depressed back in that day. Everybody told him he should do his best more, but he was already doing his best. After he got all those three's he became a delinquent, but when he saw how hard Seishuu Handa worked he decided that he was actually pretty lazy and from now he would try harder. A running gag in the series is that he is always referred to as average, something that bothers him. He becomes more hardworking and studious, though his blond hair tends to get him mistaken as a delinquent.

This is not completely untrue as shown when some kids from a neighboring town bullied Naru Kotoishi, Hina Kubota, Kentarou Oohama and the others and when he tried to protect them and the neighboring kids insulted him, he was more than willing to use force on them. He tends to get annoyed easily, especially due to the eccentric personalities of the many people living on the island.

However, most of the time he is patient and the one to keep others in line, as shown when he ordered the children to clean Seishuu's house after Miwa Yamamura, Tamako Arai, and the children used his house as a secret base and trashed it. He is fairly responsible and cares for others, though it is shown he does like to tease others. He cares a lot about Seishuu and often worries for him, considering how irresponsible and childish he can be. While he initially considered going to college, after Seishuu compliments on his cooking and how good he is at preparing food, he opts to become a chef and temporarily dyes his hair black as in Japan dyed hair or hair that is not black/brown is considered delinquency (even if it isn't dyed because Japanese take different colored hair as a sign that the person is a foreigner and are not completely open to foreigners to the point where students of foreign blood are often forced to dye their real hair color black.)

At first, Hiroshi did not like Seishuu Handa at all before he got to know him. One day when his mother asked him to deliver a meal to Seishuu he wanted to tell him that they would not be making his meals anymore and he should do it himself. When Hiroshi arrived at Seishuu's place, Seishuu tried to open the door but then passed out. After having been able to drag Seishuu into the house with Naru Kotoishi's support, Hiroshi and Naru talked about talent and Naru came to another room to get her cicadas shell collection. Wanting to stop Naru from running around, Hiroshi went after her to the other room and found out that the whole room was covered in calligraphy. When Hiroshi saw that he decided to also work hard just like Seishuu and they both slowly became friends. 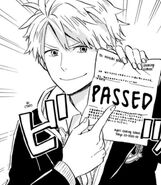 Hiroshi as a traditional dancer

Hiroshi wondering what the hell is going on 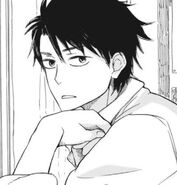 Kuroshi and his parents
Community content is available under CC-BY-SA unless otherwise noted.