Naru is a small girl with lightly tanned skin (in the anime), wide brown eyes and short spiky wood brown hair. It is down save for a small ponytail holding up the left side of her fringe.

She's normally seen wearing a white short-sleeved shirt that covers most of her aqua blue shorts (even in winter), which usually has a rope tied around them. She also wears a yellow and green bracelet on her left hand and sandals with a dark brown strap.

Naru is an energetic and cheerful kid who likes to play around. She frequently invites herself to Seishuu's house and doesn't understand personal space.

She likes to collect strange things such as bugs and shells from the beach (with slugs and other creatures still living inside them). She is also rather adventurous as shown in the first episode and chapter where she continually climbs over a tall wall despite the danger to see a beautiful sunset.

She is easily influenced and has a habit of imitating the behaviors and language of the people she sees which causes her to say words she doesn't understand that are rather inappropriate.

She is a kindhearted girl, especially towards animals as seen when she was upset about Kenta running over a frog and the headmaster using crawfish to catch other crawfish through cannibalism.

She is first seen hiding in a cabinet at Seishuu's house, which seemed to be her 'base' before Seishuu moved in. She and Seishuu grow to like each other a lot. She is often seen with her other friends, though Seishuu seems to be her favorite. He does find her antics and invasion of his home annoying but nonetheless cares a great deal about her. He even becomes a calligraphy teacher at her school. She helps remind him of what it is like to have fun and cheers him up when he is down.

Seishuu is a calligrapher who was “exiled“ to the island after assaulting the director of a calligraphy competition. The village folk including Naru calls him Sensei because of his occupation and he acts like a father/big brother to her, often looking out for her, playing with her, and letting her stay over at his place, even though he doesn’t want to show it, he frequently worries about her wellbeing. Her over-energetic nature is often a source of annoyance to him especially when he is trying to write or meet a deadline, however, he often goes along with what she wants in the end. She is very attached to him and when he is feeling down she tries to cheer him up, but this often fails because she is not very tactful. As the series progresses, he starts to care about her and often gets treated like her guardian (her actual guardian is her grandfather and father, both who are often absent because of work). She starts learning some calligraphy from Sensei but doesn’t really take it seriously and she quickly gets bored or distracted. At the end of her first year, the children did a presentation where they spoke about one thing they learned during the year that they were proud of. She talked about how she learned penmanship from Sensei which greatly moved him. Later on it was him who introduced her to her biological father, Yuuichirou, who works on a ship and only comes back during Christmas every year to bring her a toy airplane as a gift. This was a big turning point for Naru and her father’s relationship even though he still had to work away from home he starts thinking of himself as more of her father and not as a stranger that sneaks around her every year.

Kentarou is Naru's classmate who has a crush on her.

Yasuba is an elderly woman who lives in the same village and is from the same generation as the shopkeeper and Kousaku. She is first seen using a fishing line to pull Naru off a wall, telling her it is dangerous and to stay out of trouble.

Naru talking about her proudest achievement that year

Naru finally realising who Yuuichirou is 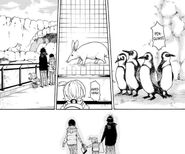 Naru enjoying the zoo with Jou and Sensei

Community content is available under CC-BY-SA unless otherwise noted.
Advertisement