Tanuki Sugino
Yuujirou Kido is the village chief of Nanatsutake and the father of Hiroshi And husband of Akiko Kido. He is described as very ordinary and average like his son.

He is a pudgy, middle aged man with black hair, black eyes, and glasses. I’m terms of physical appearance, he is very average. However in old photographs taken 35 years ago, it seems that he was once quite a handsome young man with a slender built. In the very early chapters he appears older and thinner with a sterner appearance.

He is a laid back person with an easy going personality.

He is a very good friends with Seimei and holds him in high regard, even willing to rent the building meant for someone else to Seimei’s son at a moment’s notice. 35 years ago he was a slender man but due to his love of sweet things, he started gaining weight and was diagnosed with diabetes. When Seimei sees him 35 years later, he commented that Yuujirou has gotten fat. He is a good father who is supportive of his son, an example being when Hiroshi goes for His first interview, he gives a monetary offering and prays for his son’s success. Later, he tries to hide the fact that Hiroshi failed his first interview from him. They later go to Tokyo as a family together with Akiko for his second interview which Hiroshi passed. 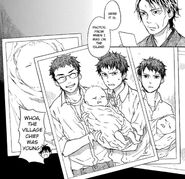 A young Yuujirou on the left with Seimei holding baby Yuuichirou 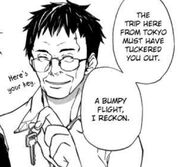 Yuujirou in the earlier chapters where he was significantly thinner and older looking.

Community content is available under CC-BY-SA unless otherwise noted.